J.K. Rowling at special gala performance of “Harry Potter and the Cursed Child”

J.K. Rowling joined some of the cast members of “Harry Potter and the Cursed Child”, on Sunday 18th of September 2016, in support of Lumos and called for an end to the separation of millions of children from families in institutions and orphanages.

The author addressed an audience of Harry Potter fans of all ages prior to the special gala performance to benefit Lumos, the non-profit organisation she founded to help end the institutionalisation of children globally by 2050.
“Children need, deserve and have a right to families,” she said. “Thank you, from everyone at Lumos, for helping us achieve our ambition of bringing eight million children back into the light. It is, to paraphrase Albus Dumbledore, not easy, but it is right.”

Thanks to the generosity of the play’s producers – Sonia Friedman, Colin Callender and Harry Potter Theatrical Productions – and Lumos’ 100% Pledge, all funds raised at the gala performance will go directly to Lumos’ work to transform the lives of some of the world’s most disadvantaged children. The special gala performance was part of a series of events in the We Are Lumos Worldwide global campaign to raise awareness and urge people to get involved with the non-profit organisation’s work to bring the hidden children to light and get them home to families. The campaign was officially launched with a Facebook Live interview on Saturday 17 September 2016.

J.K. Rowling and cast members from the play also supported the launch of a new limited edition T-shirt. The ‘Be the Light’ T-shirts feature inspirational words from the author’s Very Good Lives Harvard commencement speech in 2008: “We do not need magic to transform our world; we carry all the power we need inside ourselves already”. They are available to buy here. At least 60% of the retail price will go to support Lumos programmes around the world. 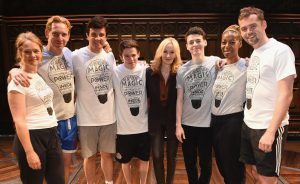