The Making of Harry Potter

This wednesday, the 15th, Warner Bros. Studios Tour announces a special six week feature dedicated to the costumes, hair and make-up effects, the ‘Wizarding Wardorbes’. In their way to promove this event, they also release some facts and stats about the process of creating the visual identity of beloved characters.

To see who are these characters and their costumes, keep reading this post.

– Rita Skeeter’s attire was inspired by 1940s Hollywood gossip columnists who would dress extravagantly to suit the occasion.

– Each outfit coordinated with the occasion and story she was reporting. To attend the first challenge of the Triwizard Tournament in Harry Potter and the Goblet of Fire, Rita Skeeter wore a brown leather suit resembling the scaled skin of the dragons used in the task.

– The acidic green outfit worn in Rita Skeeter’s first appearance was designed by Jany Temime to reflect her ‘Poison Pen’ approach to journalism.

Fleur Delacour and the Beauxbatons Academy of Magic:

– The “French Blue” fabric of the Beauxbatons uniform was chosen to stand out from the muted blacks, browns and greys of the other school colours. 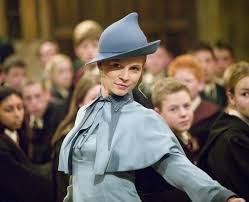 – The iconic pointed Beauxbatons hat was designed and produced by renowned milliner Philip Treacy. After creating an initial model from canvas material, Treacy would send this to Paris for a wooden mould to be shaped to the exact measurements. This was used to create the final hat for each student.

– Many of Dumbledore’s early costumes were created from antique cuts of fabric and pieces of old tapestry.

-For one of Dumbledore’s costumes two embroiderers were hired who spent eight weeks decorating a robe with ancient Celtic symbols.

– Later in the film series, when Dumbledore was injured in the pursuit of a Horcrux, his costumes were adjusted to reflect the new vulnerability of his character. His robes were washed out to more muted colours and his beard was made to be straighter and whiter than in previous films.

– In addition to the outfits worn on screen, several more were produced for the many best-selling book covers and framed photos that decorate Lockhart’s office and classroom.

– Actor Kenneth Branagh’s makeup for the character included a set of bright-white false teeth and wigs that were made purposely to look like wigs.

– Gilderoy Lockhart’s focus on his public image is reflected in the choice of lush-looking fabrics used in his costumes that included gold-embroidered velvet, silk damasks and brocades. 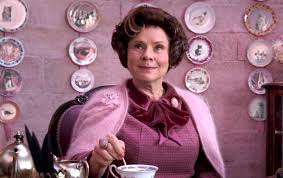 – Professor Umbridge’s ensembles were all accessorised with brooches and rings featuring images of cats similar to those in her office.

– Dolores Umbridge’s costumes became increasingly strong and more intense shades of pink to reflect her growing power within the Ministry of Magic.

– In fitting with the character’s favourite colour, even Umbridge’s wand was fashioned out of a purple mahogany and featured a deep pink jewel in the middle.