J.K. reveals the names for the couples in “Fantastic Beasts”

Those who have watched “Fantastic Beasts and Where to Find Them” already realised that the new franchise won’t lack romance, even though it’s not the focus of the story. And now even J.K. Rowling spoke up on the matter, creating cute couple names for them.

On her Twitter, the author was questioned about what was Newt and Tina’s ship name. She replied “Newtina, obvs”. Another fan suggested a name for another couple of the film and J.K. said she had always thought Jacob and Queenie as Jakweenie.

Check out the tweets: 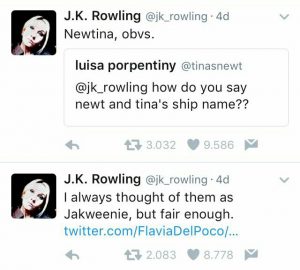 The future of “Jakweenie” is still uncertain and, although we know how “Newtina” ends, we still don’t know how the development of this relationship will happen. For that, we’ll have to wait for the sequels. The sequel for “Fantastic Beasts and Where to Find Them” will start being produced in 2017 and its premiere is already scheduled for November 16th of 2018.