“Harry Potter” will have special IMAX screenings in the US

Fantastic Beasts’ premier is just around the corner and, to celebrate the return of Rowling’s magical world to the screens, Warner Bros. announced that the eight films will return to cinemas in exclusive screenings in the US, from October 13th to the 20th.

The big news is that the films will be exhibited in 2D IMAX, marking the first time “Harry Potter and the Sorcerer’s Stone” and “Harry Potter and the Chamber of Secrets” are digitally remastered to the format. According to Warner, the last six movies made about U$ 216 million on IMAX sessions until now, and the series stand out as one of the biggest already released in this format.

“Harry Potter is one of the most beloved film franchises of all time and is incredibly important to the history of IMAX. Therefore, being able to offer each installment – especially the initial two for the very first time in IMAX- makes this a truly magical event for fans.“

With powerful quality of image and sound and a gigantic room, the IMAX experience guarantees a much bigger immersion than conventional screenings. 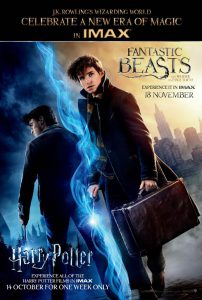 Fantastic Beasts and Where to Find Them premiers on November 18th. Stay tuned on Potterish for more news!