In another exclusive article, Entertainment Weekly released, on their website, new material of the long awaited film “Fantastic Beasts and Where to Find Them”.

Introducing the underground bar “The Blind Pig” – the name is a reference to the no-maj bars of the 20’s, called speakeasy and blind pigs, as well as a mention the the pub Hog’s Head – , the new concept art brings a broader view of the magical bar already shown in trailers: 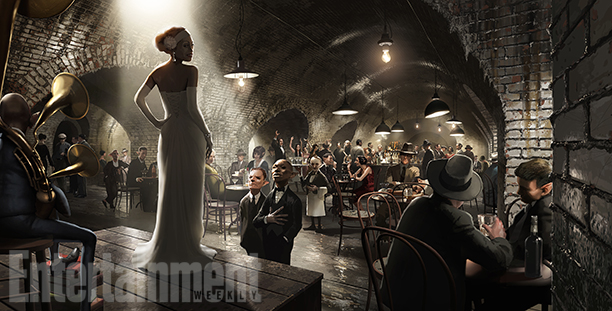 In the film, the pub is where Newt Scamander (Eddie Redmayne) and Tina Goldstein (Katherine Waterson) search for information on the mysterious Credence Barebone (Ezra Miller). The article describes the pub as a place that would never be allowed in Hogsmeade, with drinks that pour themselves, a band playing distinct instruments and plenty of posters of wanted criminals, a simple tribute the owner paid to his clientele.

The designer and producer Stuart Craig said: “It’s a disreputable place with nicotine-stained tiles of an appalling character and a bit of lowlife that’s actually quite fun.”

“Fantastic Beasts and Where to Find Them” premieres in 3D and IMAX on November 18th, directed by David Yates, produced by David Heyman and written by J.K. Rowling, marking her debut as screenwriter.