A Brazilian in Harry Potter: 9 curious facts by Eduardo Lima

Potterish was in London to have a chat with Eduardo Lima, graphic designer of the Harry Potter series and Fantastic Beasts and Where to Find Them. Yes! He is the “Lima” from the famous MinaLima studio, which works for Warner Bros. Pictures on the film’s shooting sets.

From the House of MinaLima, our webmaster Marcelo Neves brought nine curious facts about the relation of the Brazilian designer with J.K. Rowling’s Wizarding World.

1. “The movie of an orphan who becomes a wizard”

Eduardo, who comes from Caxambu, a Brazilian city located in the state of Minas Gerais, came to the United Kingdom for the first time in 1997. Two years later, back in Brazil, he was working with cinema when he confided to the director Ludmila Ferolla his wishes to go back to the Queen’s land. She was the one who introduced him to the woman who would become his best friend and business partner: Miraphora Mina, who was working in “the movie of an orphan that becomes a wizard” and offered him a week’s internship on the Harry Potter and the Philosopher’s Stone movie set. “I didn’t know the books properly, so I had to read them in order to keep up with everything”, he remembers.

2. The meeting with J.K. Rowling

It was without knowing much about the Wizarding World that Eduardo met J.K. Rowling for the first time. Back then, busy with the following books of the series, Jo didn’t attend to the sets frequently. “If she stayed there, she would lose it”, he jokes. However, the author once confided the designers that her favourite room on the Leavesden Studios was theirs. “What we do is really close to her world”, realizes Eduardo. “The books’ covers, The Daily Prophet, its headlines and articles, everything was our job to create”. 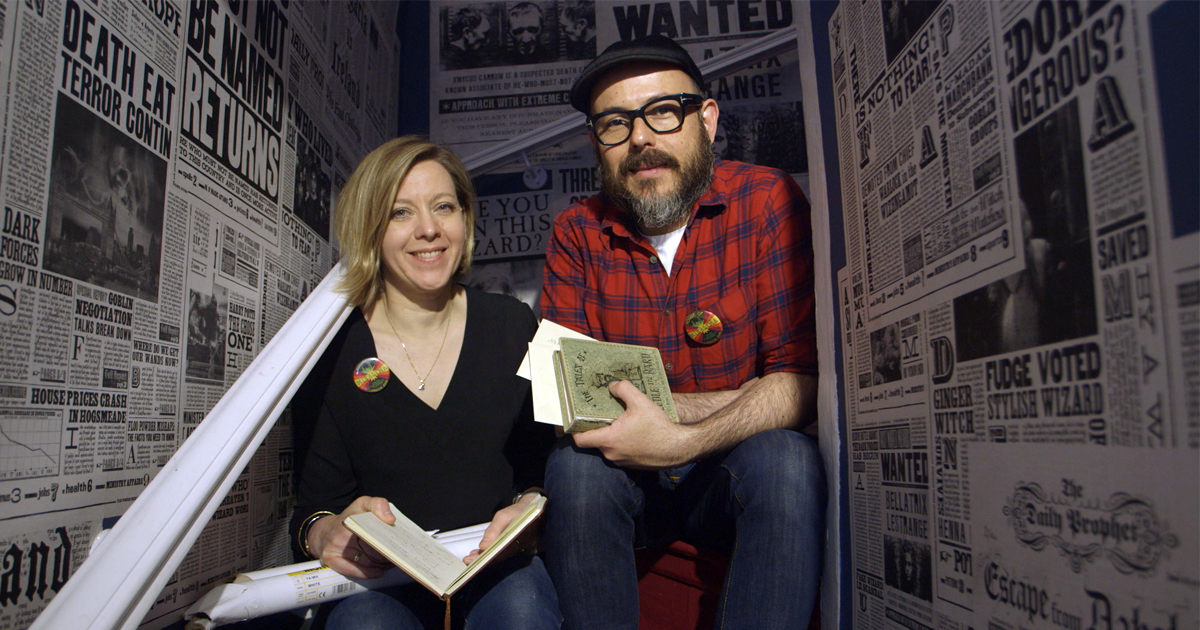 3. The House of MinaLima

After many years, Miraphora Mina and Eduardo Lima have built up in their trunkets an infinity of experiences connected to the Wizarding World. It was only in 2015, though, that they asked Warner Bros. for permission to exhibit their work on a londoner gallery. With the premiere of the Harry Potter and the Cursed Child theatrical play – which Eduardo watched on its debut night, two rows away from Jo Rowling –, the exhibit became a store, located in a beautiful residence on Greek Street, downtown London. Amongst Daily Prophets, Marauder’s Maps and Hogwarts letters, the House of MinaLima sells items all fans would love to have. They even export to other countries – like Brazil, of course! They have efficient owls, don’t they?

To Eduardo, a designer cannot get attached to his creations. “Props that take months to get ready end up not being used, while others, made in a few minutes, get featured in the production.” Happily, his two favourite jobs had plenty of time to be produced and shined in almost every film: the Marauder’s Map and the Daily Prophet. “They were the pieces that demanded most work, but were the most gratifying. When we created them, we didn’t know of the importance they would grow to have.” His biggest disappointment, however, was being unable to work on S.P.E.W., campaign on behalf of the protection of domestic elves lead by Hermione Granger and cut off from the adaptation of Harry Potter and the Order of the Phoenix.

5. Fantastic Beasts and Where to Find Them: The Original Screenplay

After working on the graphic project of Fantastic Beasts and Where to Find Them: The Original Screenplay, Eduardo and Miraphora received a signed copy from the writer, J. K. Rowling: “This is the most beautiful cover of all my books”, she has written. To him, who always saw his work in Harry Potter and the Prisoner of Azkaban as his best contribution to the Wizarding World, it was a great surprise. “I am going to keep this book to my retirement”, the designer states amongst laughs.

While the first movie from the Fantastic Beasts franchise has taken almost a year of production, its sequel could be more concise. In order to all come out as planned, the presence of Rowling herself is essential: “We already sent an email with questions and will schedule a meeting so she can explain us everything”, says Eduardo. Other essential characters that are always present on these meetings are the director David Yates, who has attended to the same cinema school that Miraphora Mina, and the production designer Stuart Craig, who was introduced amongst many compliments by Rowling to the former first lady of the United States, Michelle Obama, during a visit to the Warner Bros. Studio Tour. 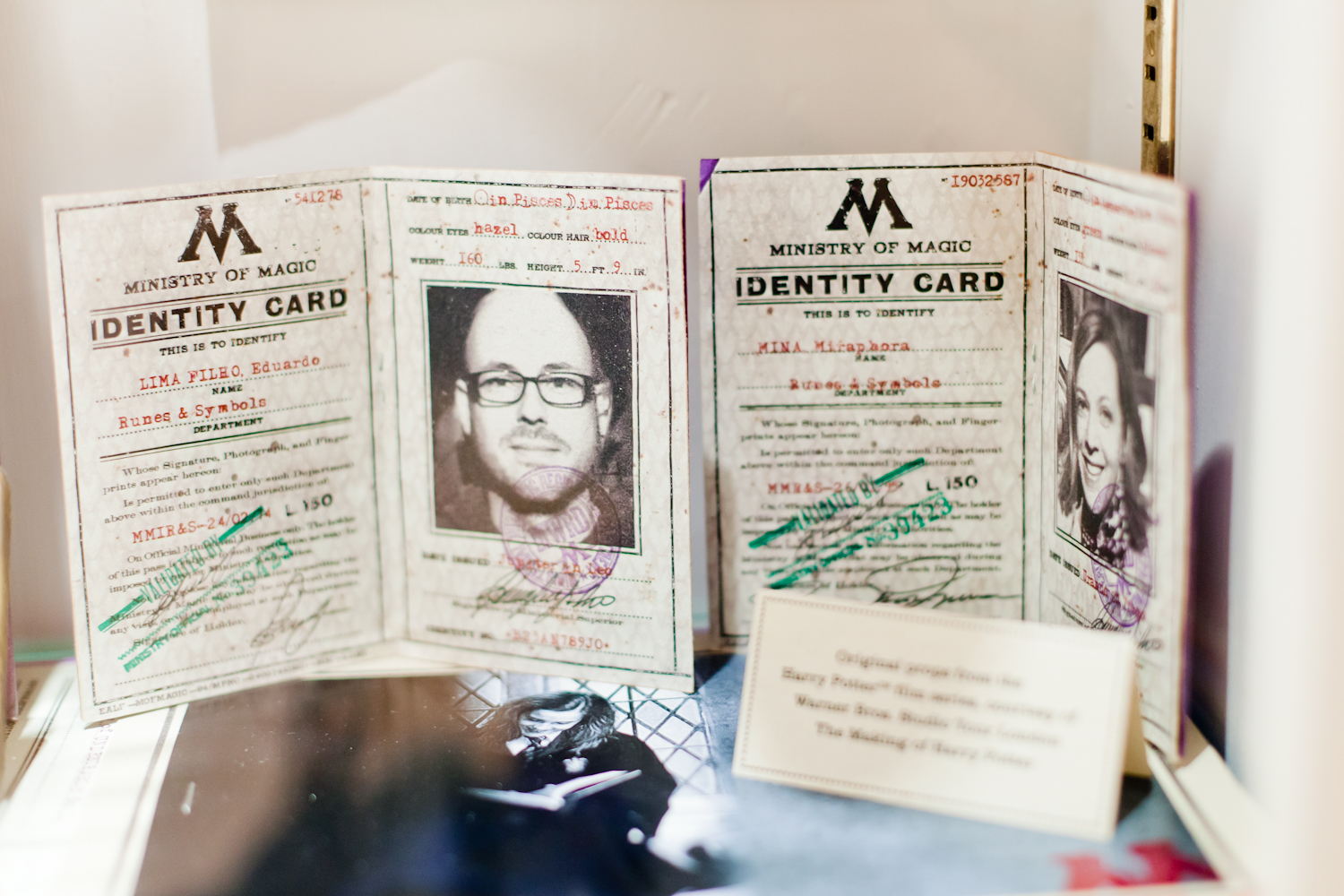 During its almost 20-year of existence, Harry Potter has suffered many episodes of religious persecutions, in Brazil included. Across the ocean, the designers from MinaLima have gone through similar experience while searching a Scottish craftsman to work on the fifth film. “On the moment he found out it was for a Harry Potter movie, the man said he had to stop talking, because his religion did not allow him to get involved with this type of movie.”

8. An advice to young designers

Every time he attends to A Celebration of Harry Potter, gathering that happens annually on the theme park in Orlando, USA, the Brazilian receives a series of questions from young men and women that admire him and want to follow his steps. To him, it is simple: do not stay restrict to technology. “When we made Harry Potter and the Chamber of Secrets, I didn’t have a computer. Almost everything was handmade”, he remembers. “The technology helps when it comes to quick works. Sometimes, the production gives two hours for us to deliver a prop. Without a computer, I could never make it. But knowing how to craft manually is essential to keep up with the advances.”

9. A House of MinaLima in Brazil?

In London, most of the questions Eduardo receives are about his path to his great job being Brazilian. “They think Brazil is just the country of corruption. I want to help change this thought”, says the designer. The massive amount of work, however, keeps him from visiting our country frequently, but “Mira really wants to know Brazil. She wants to go on Carnaval.” Very pleasantly, Eduardo tells about his wish to open a House of MinaLima somewhere in Brazil, “even though if just for six months.”

As the old saying goes: hope is the last to die!

Written by: Kaio Rodrigues.
Edited by: Pedro Martins.
Translated into English by: Anna Carolina Viduani and Beatriz Souza.
With thanks to Caroline Oliveira, Beatriz Souza and Juliana Torres.