J.K. ROWLING EXPLAINS HER INVOLVEMENT ON THE CREATION OF THE CURSED CHILD

In a Q&A session of her website , J.K. Rowling wrote about her involvement on the creation of the play Harry Potter and the Cursed Child.

The writer told that she had refused proposals to adapt Harry Potter to the stages for ten years, until she met the producers Sonia Friedman and Colin Callender. “I only knew that they wanted to do something new, which was intriguing, because I had no desire to go endlessly back over old ground”, explained.

After accepting the proposal from Friedman and Callender, J.K. Rowling started working with the playwright Jack Thorne and the director John Tiffany. She told them what had happened to Harry, Ron and Hermione after The Deathly Hallows and explained her special interest for Harry’s son, Albus Severus, that received three legendary names of the Wizarding World and suffered great pressure from it. “I have so many wonderful memories of the earliest rehearsals, of seeing the costumes and illusions for the first time, but what I remember most fondly about the three of us working together is the laughter”, she remembers. “Very few people have come inside the The Wizarding World with me and it creates a particular bond.”

When watching the play for the first time, J.K. Rowling felt moved remembering the seventeen years she spent writing Harry Potter. “I particularly remember the first full dress rehearsal I watched. By this time I knew the script backwards, had heard it read all the way through and watched individual scenes acted, but nothing prepared me for seeing it in its entirety, in the theatre”, she tells. 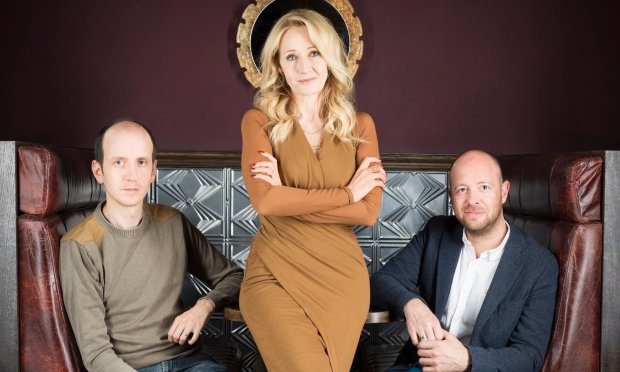 A public and critical success, Harry Potter and the Cursed Child has been playing in London since July 2016. In addition to the British capital, the play has been playing on Broadway, New York, since April 2018, where counts with the original main cast and a theater exclusively renewed for the play. The production will also premiere at Princess Theatre, in Melbourne, Australia, in early 2019.