Original screenplay of ‘Fantastic Beasts’ will be published on November

More great news awaits Harry Potter fans for the end of the year. In addition to the release of the movie of “Fantastic Beasts and Where To Find Them” in theaters, Pottermore has just announced the publishing of the movie’s original screenplay, written by J.K. Rowling on her debut as a screenwriter. 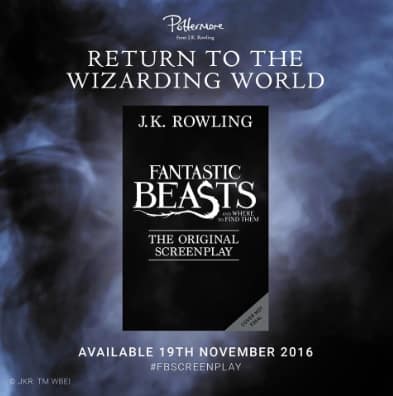 “A new book from J.K. Rowling is always a good reason to celebrate. But this year will mark the first time the author has published a screenplay, which you’ll be able to buy as a print edition from Little, Brown (UK) or Scholastic (US and Canada), or as an eBook right here on Pottermore.”

The screenplay will be released on November 19th of this year, a day after the movie’s official première in theaters.

More informations about pre sale will be available soon, so keep up with Ish!