Hogwarts in Fantastic Beasts is not fan service, says the director

The first movie in the Fantastic Beasts’ franchise doesn’t make any direct references to Harry Potter, but Harry’s and Newt’s worlds will start to connect from the second movie on. Judging by the Crimes of Grindelwald’s promotional campaign, the Hogwarts Castle will be among the most remarkable references to the Harry Potter franchise.

However, according to director David Yates, the school won’t have a lot of screen time. “We’ll pass by Hogwarts very quickly halfway through the movie. We’ll see the castle, in 1927, for around 10 minutes,” he revealed during an interview to POTTERISH while shooting the movie, in England.

The movie is set in 1927 and, during its narrative, Hogwarts will be featured in flashbacks of the 1910s which will show Newt and Leta Lestrange as teenagers. In one of the scenes, Dumbledore teaches Newt how to face a boggart with the Riddikulus charm, another nod to Harry Potter. 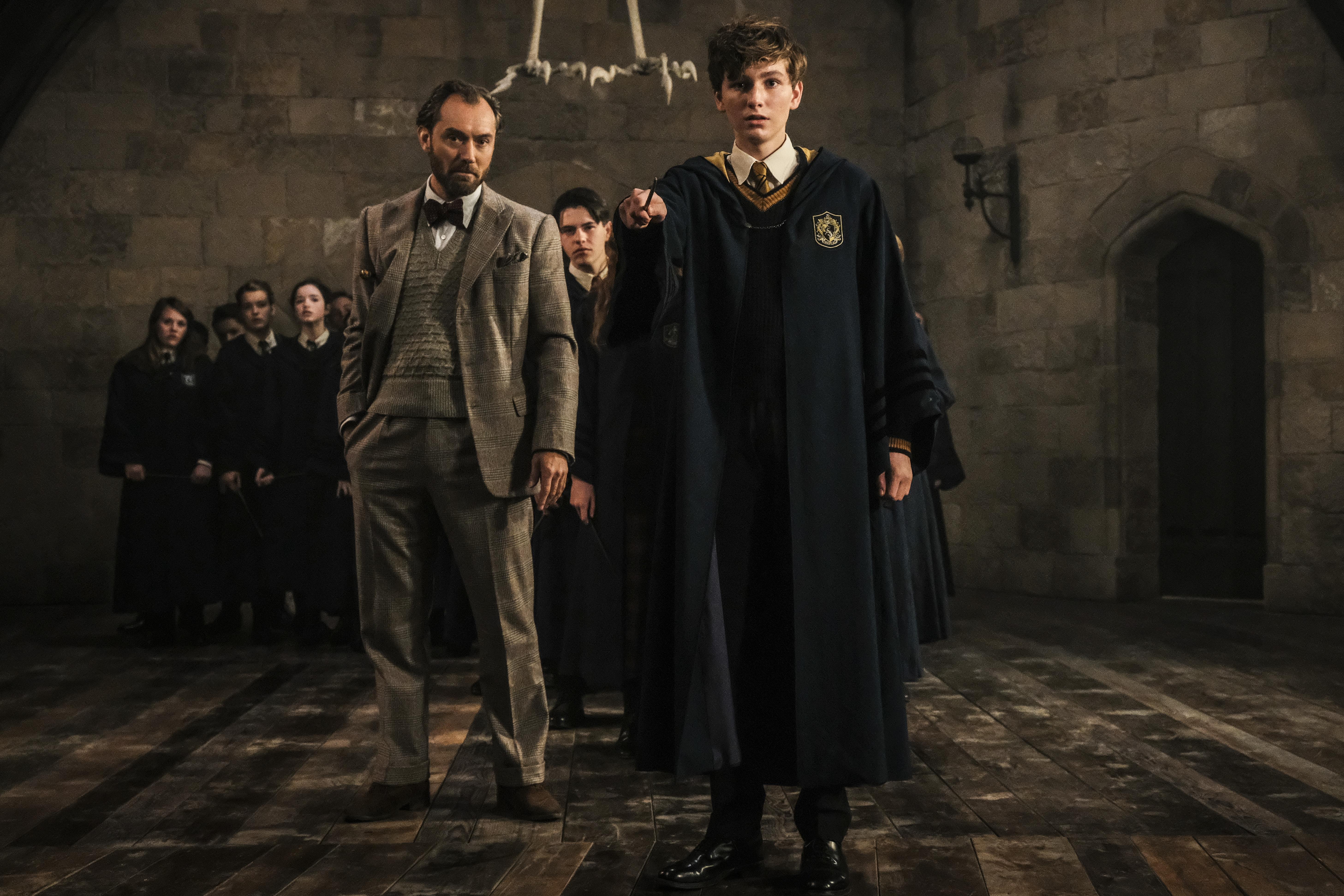 The nostalgia is at the heart of the movie’s whole marketing campaign. Two of the three trailers released begin at Hogwarts. However, according to the director, bringing the school back to the screen wasn’t a strategy to please the fans. “Since we were bringing Dumbledore back, it only seemed fair to bring Hogwarts back”, Yates explained. “What brought Hogwarts back was the story’s development. […] It’s a very important element, not a way to feed the nostalgia factor”.

Elements from the Harry Potter and the Philosopher’s Stone will also make appearances, such as the Mirror of Ojesed, the alchemist Nicholas Flamel, the Philosopher’s stone and Dumbledore’s Deluminator, as well as Voldemort’s snake, Nagini. “To be honest, we always try to balance new elements with what we already know,” says the director. “These references are part of the movie, but neither me nor Jo Rowling are interested in focusing on that. We don’t want to go back to the past, unless it is absolutely necessary for the story or for some character,” he adds.

“You don’t look a day over 375”, Jacob comments jokingly in The Crimes of Grindelwald.
(Photo: Warner Bros. Pictures/Distribution)

Dumbledore’s outfit has always divided opinions among Harry Potter fans. On the first chapter of Philosopher’s Stone, the wizard wore “long robes, a purple cloak that swept the ground, and high-heeled, buckled boots.” In the movies, however, they never followed that characterization. From Prisoner of Azkaban on, the flamboyant colors lost space to a long purple-ish robe. In Fantastic Beasts: The Crimes of Grindelwald, Dumbledore wears grey and beige colored clothes, which display, seriousness and sympathy at the same time.

During an interview to POTTERISH, the costume designer Colleen Atwood, who won the Oscar for the first Fantastic Beasts movie, said the grey tones are due to the differences between the Dumbledore from 1910-1920, in Fantastic Beasts, and the one from 1990, in Harry Potter. The professor was around 30 and not 100. His personality and style were not the same.

To create the outfit, the designer discussed the character with actor Jude Law. They had in mind that, during Newt’s time as a student in Hogwarts, Dumbledore was his favorite professor because he was more available and closer to students than he was during the Harry Potter stories. They, then, came to the conclusion that his outfit should be less iconic than the one worn by the character after he had become Headmaster. After that, the designer tried to find a balance between clothes that were different than the ones worn by the other characters and with some flamboyancy that would put him on a pedestal. 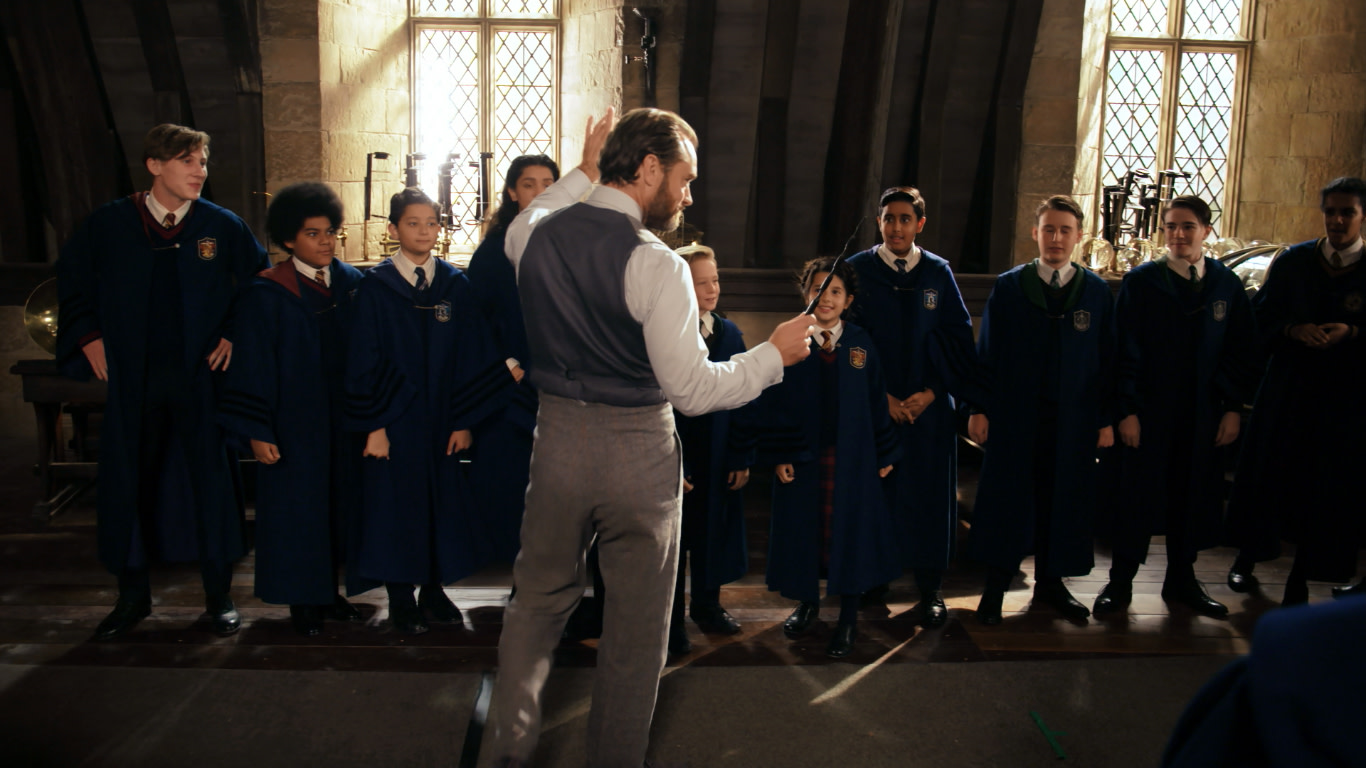 How much does the Hogwarts outfit cost?

During Newt Scamanders’ time, Hogwarts uniforms were blue and the hood’s inside featured the color of the student’s house. To differentiate them from “choir clothes”, costume designer Colleen Atwood cut the robes shorter than the ones from the Harry Potter movies. The girls wore even longer skirts, a nod to the time the movie is set, but the sweater and the shirt were not changed. 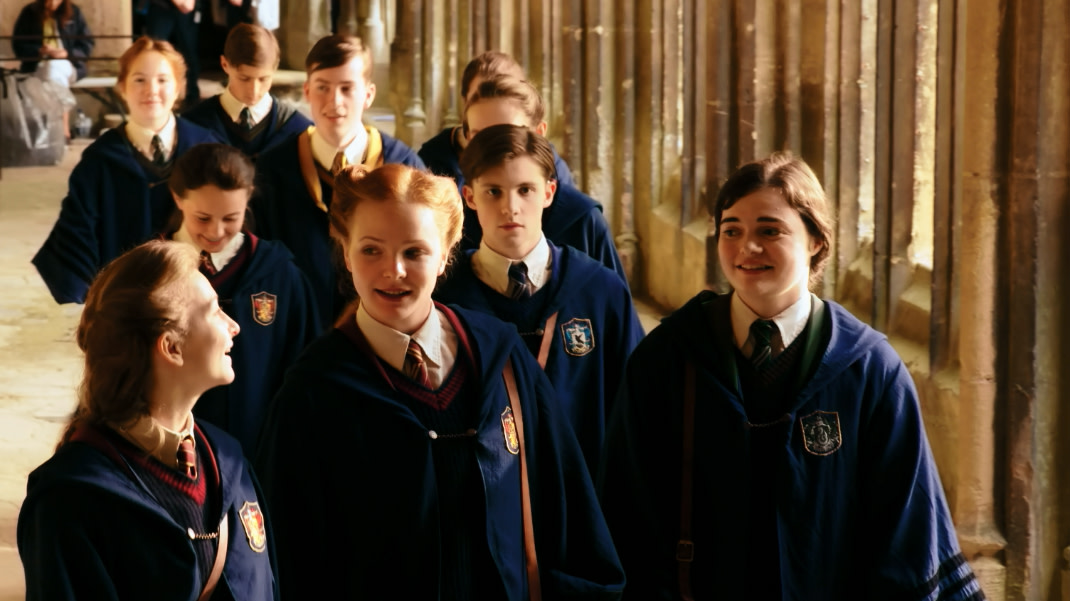 In 70 years, Hogwarts has barely changed

The art department had to rebuild sets seen in Harry Potter, such as the Defense Against the Dark Arts room, which changed throughout the 8 movies according to the professor’s style. At the time of Crimes of Grindelwald, the subject’s professor was Dumbledore, so some of the decoration in the room is the same as the one in his headmaster’s office, such as the astronomy equipment. “It was nice to take the dust off of them and bring them back from the exhibits to be used again”, joked Pierre Bohanna, who coordinates the use of props.

Among the never seen before scenarios, there’s a hut where Newt keeps his stuff. “It’s a small yet very cute and full of detail scenario. It’s my favorite set in the movie,” the art supervisor finishes, careful not to spoil any secrets from the plot.

Written by J.K. Rowling, Fantastic Beasts: The Crimes of Grindelwald premieres in November 2018.

Translated into English by Dimitri Manaroulas
Edited by Aline Michel