Fantastic Beasts: The Crimes of Grindelwald gets a panel at San Diego Comic-Con

[borda1]https://cdn.potterish.com/wp-content/2017/11/16151047/AnimaisFant%C3%A1sticos_2_CrimesDeGrindelwald_Borda1.jpg[meio]British Magazine Radio Times revealed that Warner Bros. Pictures will host a panel on Fantastic Beasts: The Crimes of Grindelwald, Aquaman and Wonder Woman at San Diego Comic-Con. The presentation will take place on July 21st, from 10:30 to 12:30 (GMT).

During the SDCC 2016, year which Fantastic Beast and Where to Find Them was released, a panel was held with the presence of main actors. Together, they presented the newest trailer and poster to the audience. 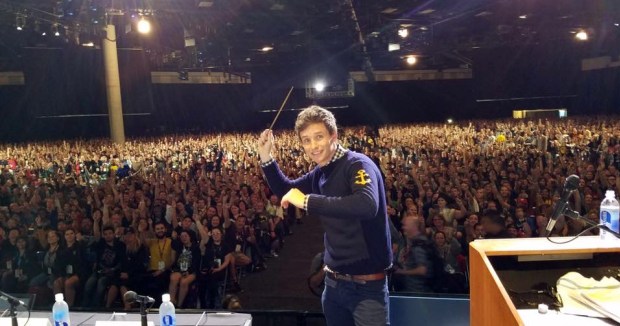 More:
+ Fantastic Beasts 2 is about the dangers of Absolutism, says the producer

Fantastic Beasts: The Crimes of Grindelwald takes place in New York City, London and Paris, with references to the Harry Potter stories. A few months after being captured, Grindelwald dramatically escapes from MACUSA and begins to conquer followers for the wizarding supremacy cause. With help from the magizoologist Newt Scamander, the only wizard capable of stopping him is Albus Dumbledore, a Hogwarts professor. The movie premieres on November 16th, 2018.