J.K. Rowling explains her function on the production of Fantastic Beasts

J.K. Rowling published on her website a session of Q&A clarifying her function on the production of the Fantastic Beasts franchise. Even though the second movie (The Crimes of Grindelwald) will hit the theaters on November 2018, the author is already working on the third script of the series.

Although Fantastic Beasts being her debut as screenwriter, J.K. Rowling works in the movie industry since Harry Potter and the Deathly Hallows: Part 1, in which she was the executive producer. However, even accumulating two positions in the production of Fantastic Beasts, her word isn’t final. “Warner Bros and David Yates, the director, have always let me have my say, though not necessarily the final word. […] The director is ultimately responsible for everything that’s seen on the screen. As the screenwriter, the majority of my input comes at an earlier stage”, she explains.

To the author, seeing the amount of people that works to make movies is distressing. “When I go down to WB Studios Leavesden and see a thousand people at work on Fantastic Beasts, […] terrifying thoughts run through your mind, such as, I must not break an arm, because all these people’s jobs depend on me getting the screenplay finished”, she kids. The cinema’s magic, however, always makes it worth. “The thing with movies is, however frustrated you get with the screenwriting process, and right at the moment when you think ‘never again, this is too hard’, you go down to the film set and join in with one big glorious game of pretend, with the world’s best pretenders saying your words, and dressing out of the most fabulous dressing up box, and what with the lights and the smoke and the music you’re suddenly in love with the process all over again.”, she ends. 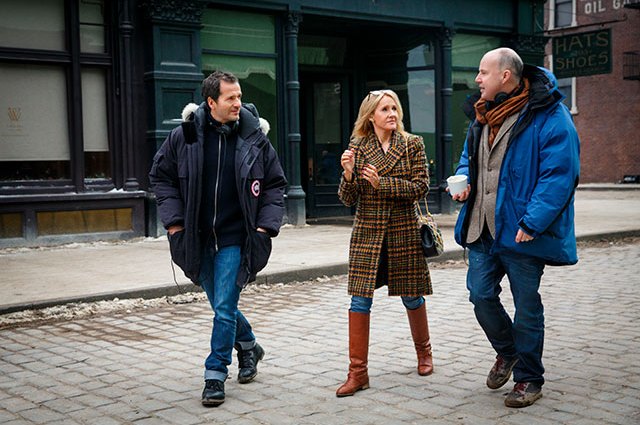 Written by J.K. Rowling and directed by David Yates, Fantastic Beasts: The Crimes of Grindelwald premiers on November 16th, 2018. The sequel takes place in New York, London and Paris, with references to the Harry Potter stories. A few months after being captured, Grindelwald dramatically escapes from MACUSA and conquers followers to his witch supremacy cause. With help from the magizoologist Newt Scamander, the only wizard capable of stopping him is Albus Dumbledore, a Hogwarts professor. In a darker era of the Wizarding World, the characters will face dangers to test their loyalty.

More:
+ See the cover of the screenplay for Fantastic Beasts: The Crimes of Grindelwald