Fantastic Beasts: The Crimes of Grindelwald ︎◆ Movies and Plays

During a movie convention for the press (CinemaCon), Warner Bros. Pictures revealed two scenes from Fantastic Beasts: The Crimes of Grindelwald. One of them is a Hogwarts flashback, in which Albus Dumbledore teaches the spell Riddikulus. When facing a Boggart, a teenaged Newt Scamander faces a desk. Right after that, Dumbledore explains: Young Newt’s biggest fear is to work a desk job.

The books from the Harry Potter series tell us that, before becoming Headmaster, Dumbledore used to teach Transfiguration in Hogwarts. However, the spell Riddikulus is taught in Defense Against the Dark Arts – at least during Harry’s third year, with Professor Lupin. This new scene, though, adds fuel to the theory that arised with the first trailer from Crimes of Grindelwald, in which Dumbledore is interrogated by the Ministry of Magic in the Defense Against the Dark Arts room: 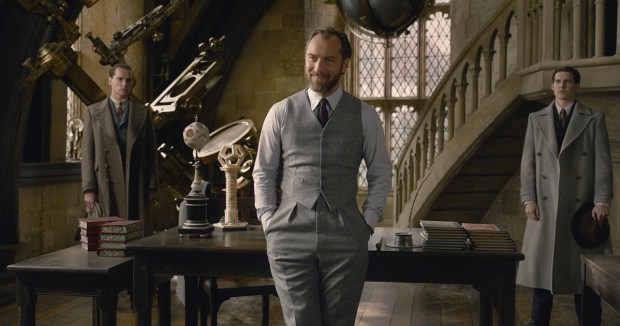 The other scene shows Jacob Kowalski meeting the alchemist Nicolas Flamel. “You don’t look a day over 375,” says the No-Maj to the creator of the Philosopher’s Stone.

More:
12 secrets and theories about the Fantastic Beasts: the Crimes of Grindelwald trailer
“Being part of Harry Potter world is like to have got a golden ticket”, says Dan Fogler