“I’ve never written a novel with a view to filming,” says J.K. Rowling about Cormoran Strike

Even before J.K. Rowling’s pseudonym was revealed, BBC already had an interest on producing a TV adaptation of The Cuckoo’s Calling. Last Sunday (25), Career of Evil, the third season of the Strike series, premiered on the British channel. In interview, Rowling explained to BBC the challenges of adapting Cormoran Strike and the behind the scenes from Robert Galbraith.

“It was just a way of disconnecting myself from all of the baggage that comes with being me. In fact, we had a call from the BBC and they wanted to adapt it before they knew it was me,” Rowling recalls about her secret, which lasted only three months. “I’ve never written a novel with a view to filming,” she says, even though (almost) all of her books have been adapted to the big screen or television. “You are obviously giving up control, so you’d better really trust the people you’re working with. That’s key for me.”

Tom Burke and Holliday Grainger, who play detective Cormoran Strike and his partner Robin Ellacott, got praise from both critics and public. “He’s a fantastic actor and he’s got all of the physicality of the part. [Strike is] obviously an amputee, it’s physically difficult at times for him to move,” the author says. “I hadn’t had much interaction with Jo before we started shooting, but her notes from the get go were quite positive and that gives you confidence,” said Grainger in interview to Potterish. 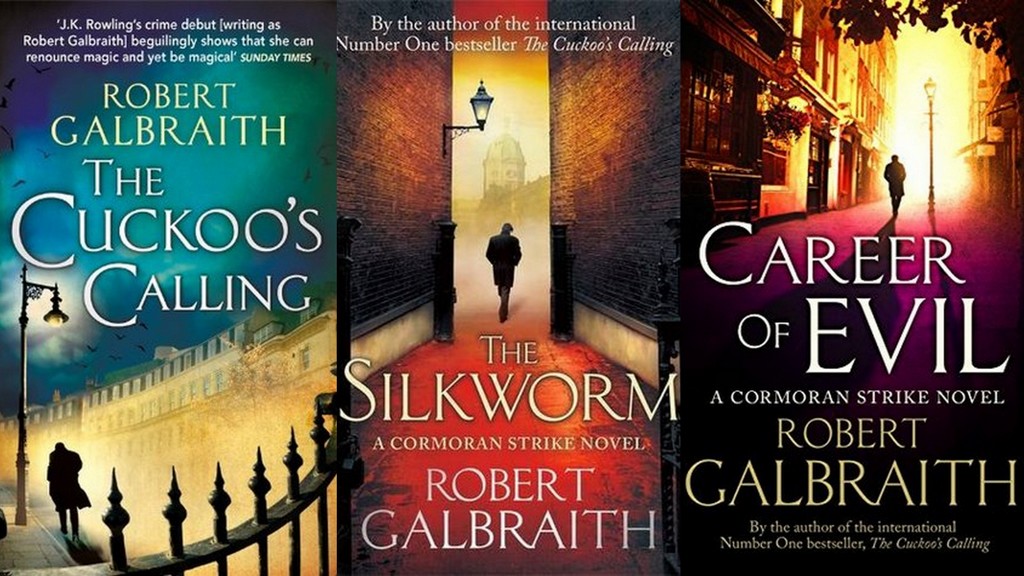 In The Cuckoo’s Calling, the duo investigates the death of Lula Landry, a supermodel whose circumstance of death leads the police to believe it was suicide. Her brother, although, hires Strike to prove the opposite. “I wanted Strike’s first case to be very high-profile,” Rowling explains.

The second volume, The Silkworm, takes the investigator to the publishing industry. When writer Owen Quine disappears, her wife hires Strike to bring him back, believing her husband left to get her attention. However, Strike finds out the disappearance is an attempt to silence the author for writing a nasty novel about every author and publisher he knew.

“Career of Evil is very different, because you’re looking at three stories that interweave with Strike’s own,” Rowling explains. On the third volume, Robin receives a mutilated leg in her mail. Strike realises it’s a threat and both enter an investigation of the ghosts from their pasts to find out who would be capable of such brutality.

Still with no estimated publication date, Lethal White, the fourth book, is to be the longest of the series. On Twitter, Rowling explained her writing process. “I plan a lot. This particular novel’s plan comprises a vast, complicated, colour-coded table showing all the suspects, with blue ink for clues and red ink for red herrings.”

Only aired in the UK, Strike had an average of eight million spectators per episode, according to BARB, institution that measures the audience in the country. These are significant numbers; for comparison, the first season of Sherlock had similar numbers.

The second and last episode of Career of Evil airs next Sunday (4), at 9PM, on BBC One. The show will air in the United States this June on Cinemax, by HBO.

Watch our interview with Tom Burke and Holliday Grainger:

Translated into English by Beatriz Franco and revised by Anna Viduani.