If you’ve ever been to The Wizarding World of Harry Potter, at Universal Studios Hollywood, then you know that frozen Butter Beer is one of the best drinks of all time. And now you also have option of a hot version of the beverage.

Described as “delightful, delicious and hot”, the new beverage will be offered seasonally at Three Broomsticks™ at “The Wizarding World of Harry Potter™” in Orlando.

Like its traditional and frozen counterparts, hot Butterbeer is reminiscent of butterscotch and shortbread that’s been perfectly fine-tuned as a Hogsmeade treat. Sounds like an interesting alternative to coffee or hot chocolate! 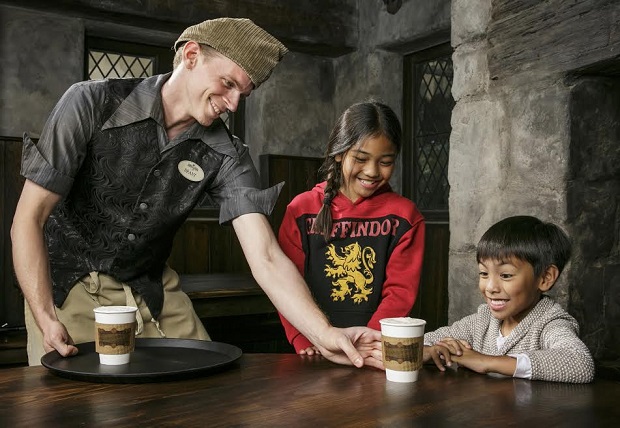 The Three Broomsticks, is an aged rustic tavern, caters to guests with an array of authentic British breakfast, lunchtime and dinner fare while they are seated at custom-made wooden tables, chairs and benches in a warm and inviting atmosphere inspired by the Harry Potter books and films. Gathering inspiration from historic British taverns, the adjoining Hog’s Head pub features original draught beers and spirits created exclusively for the land, including Hog’s Head Brew, Dragon’s Scale, Wizard’s Brew and Fire Whiskey. Also available are Pumpkin Fizz and Gilly Water and the three Butterbeer choices: traditional, frozen and hot.