Pottermore published recently the covers for the German Harry Potter audio books. Created by the visual artist Olly Moss, the covers display the artist’s unique style, inspired by postcards from the 50’s.

When asked about his favourite among all seven, Moss pointed out that he believes the “Chamber of Secrets” to be the most authentic, because it mirrors the style of the vintage posters he inspires himself in. In contradiction to this affirmation, Moss said that, even though he has his own opinion, he thinks the best way to appreciate the covers is to analyse them as a whole, once they were created exactly like that.

Click the images below to enlarge and see each design created by Olly Moss. 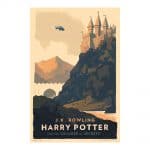 And if you don’t speak German, don’t worry: the designs will be released as posters as well. You can purchase them through Olly Moss’ official website, clicking here. We would like to remind you they will only be available for ONE WEEK. That being said, the fans who are interested on hanging these posters on their bedrooms must order them as quickly as possible.

What did you think of the new covers? Use the comments session to tell us your opinion!