David Yates, director of “Fantastic Beasts and Where To Find Them” and of the last “Harry Potter” movies, has been giving a few quick interviews on the premières of “The Legend of Tarzan”, his newest work, also by Warner Brothers Pictures. For the specialized Cinema portal Collider, Yates revealed at which stage the post-production of Fantastic Beasts is:

” We’re quite a way ahead in the editing, and it’s all going very, very well. We lock the movie in about ten or twelve weeks. I’m working with James Newton Howard on the score, and I’m working with a visual effects team to get all of the pieces ready. So, we’re in that big post-production phase of actually getting it all finished, and it’s going very well.”

On april of this year, Rowling wrote on her Twitter that she had seen the movie on a private screening. This leads to think that, at the time, the author had watched a material still far away from the final one.

You know what rounds off a great day? A private screening of #FantasticBeasts. 😍😍😍😍😍😍😍

Still about “Fantastic Beasts”, the director answered about what he’s looking forward the most for the fans to see on the big screen.

” The new characters. We’ve got a fantastic cast, and the characters that Jo Rowling has created, she’s got this amazing ability to create characters that you immediately empathize with and fall in love with. I think that’s the strength of this new episode, this new world, if you like. You’ll want to spend time with these characters. I think you’ll regret leaving them behind when you walk out the door of the cinema, and you’ll be longing to get back to them. Newt Scamander (played by Eddie Redmayne) is a bit awkward, socially, but loves these extraordinary strange beats of his. And he’s got a lot of compassion and a lot of love. He’s a marvelous creation, and the other characters that Jo has created are terrific, too.” 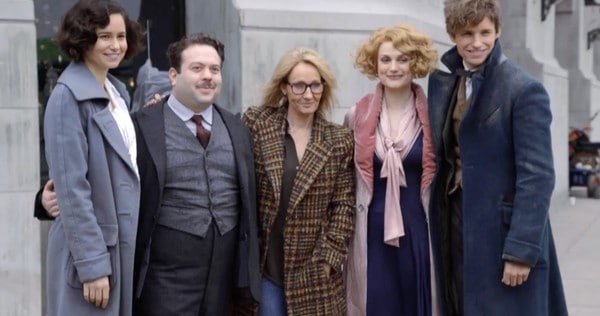 On one of his recente interviews, Yates revealed that the screenplay of the second “Fantastic Beasts”, also written by J.K. Rowling, is already finished, as we reported yesterday.

The live-action version of “Tarzan” has as a plot the iconic character back in the jungle as na emissary from the British Parlament after a while living with his wife Jane on London. It ‘s release date is on July 22nd.
News translated to English by Marina Anderi