It was released this week the first picture of Rupert Grint on a new movie named “Adolf The Artist”, previously called “The Artist”. It is know that on this movie Rupert will play August “Gustl” Kubizek, musician, conductor and childhood friend, of Adolf Hitler, who will be played by Iwan Rheon (known for his character Ramsay Snow on Game Of Thrones). 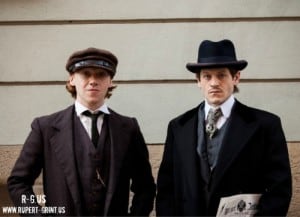 Below, you can read a little bit more about the movie:

“Adolf Hitler has been portrayed on screen many times but never like this! Adolf the Artist is a satirical drama starring Iwan Rheon (Game of Thrones) and Rupert Grint (Harry Potter), telling the little-known tale of a young Adolf, before politics and before war, when all he could dream about was becoming a famous painter.

Historically accurate, this imagining of the young pre-tyrant is comedic in its approach and sees him at a crossroads in his life, when his struggle was purely about not being a good enough artist. In 1907, an 18-year-old Hitler applied to the prestigious Vienna Academy of Fine Arts, certain that his genius would be recognised. It wasn’t. He resolved to re-apply the following year and moved to Vienna, hopeful that living amongst artists would rub off on him.

Not one to let himself go, Hitler found the opium-taking, schnapps-swilling, sexual experimentation of his fellow artists somewhat irritating and as hed not yet developed into a demagogic ranter, no-one listened. They didnt have to. Yet. This story follows Adolf in the run-up to retaking the entrance exam, burdened by temper tantrums and an oddball dress sense, and desperately trying to improve as an artist and gain recognition.”

“Adolf The Artist” will be streamed by Sky Arts (British television channel), however the date has not yet been announced.